Founded in 1942 by Don Julio Gonzales, the Don Julio house distils from 1949 a 100% agave tequila. In 1987, to celebrate 45 years of production, the first premium aged tequila was named Don Julio Reposado. But it was in 2002, for the company's sixtieth anniversary, that Don Julio 1942 was introduced to the market, a tequila aged for a minimum period of two and a half years in American oak barrels. 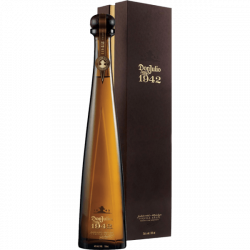