It was in 1734 that Jacques Fourneaux created a Champagne wine trading house because he worked with the great Benedictine abbeys, then owners of the most beautiful Champagne vineyards.

Jacques Fourneaux started this activity in Reims by marketing still wines of red or white Champagne, then sparkling wines from these magnificent vineyards.

It is the third in the history of Champagne to start trading. In the 1820s, Les Fourneaux joined forces with Antoine Forest. Very quickly the new business prospered under the name of Forest-Fourneaux.

It occupied for a time the hotel le Vergeur in "Reims" before transferring, after the First World War, its activity rue de Tambour in the 13th century residence of the Counts of Champagne.

It was in 1932 that Pierre Taittinger acquired the Château de la Marquetterie near Epernay from the Champagne House Forest-Fourneaux. From 1945 to 1960 the house was managed by François Taittinger helped by his two brothers Jean and Claude and it was at this time that the house was established in the cellars of the Saint-Nicaise abbey, built in the 13th century on chalk pits. Gallo-Roman dating from the 4th century. Then in 1960, Claude Taittinger will direct and give a considerable impetus to this House.

After difficult times within the Group to restructure the Capital in the years 2005-2006, it is Pierre -Emmanuel Taittinger, a third generation who has taken up the torch helped for a few years by his two children Clovis and Vitalie, a fourth generation for write the future.

The Maison Taittinger vineyard covers approximately 300 hectares for a production of around 6 million bottles. 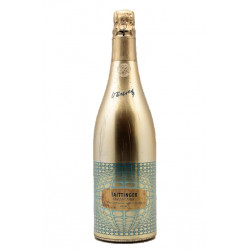