It was after the Second World War that Maison Egly was born when Francis Egly's grandfather started out in wine with 3 hectares of vines in the Grand Cru Ambonnay. By purchase, the descendants of Michel then Francis by marriage to Madame Ouriet will acquire 9 other hectares, including the magnificent plot of Crayères where the vines are over sixty years old.

In total, the vineyard, with an average age of 40 years of vines, covers around ten hectares on the Grands Crus Ambonnay, Bouzy and Verzenay with two thirds of Pinot Noir and the rest shared between Pinot Meunier and Chardonnay. The soils are clay-limestone, as in all the great wines remarkable in France and are exposed south-south-east. Everything is in reasoned culture.

Depending on the characteristics of the harvest and the wine, Francis Egly, the current owner, varies the proportion of barrels from 1 to 5 years old since 1995 in which the wine will age in varying proportions in order to let each terroir express itself rather than to follow an invariant recipe. There has been no malolactic fermentation since 1999 in order to preserve the freshness of the wine and the disgorging dates are mentioned on the back labels.

Unlike Champagne, which sells its bottles increasingly younger, Francis Egly, following his father Michel, patiently builds a treasure that allows him to market his brut after four years of aging, and its vintages at- beyond six years. Very low production of around 100,000 bottles depending on the year. 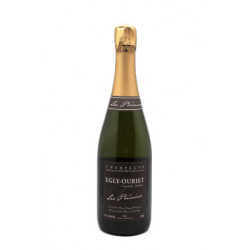