It was in 1833 that Louis Roederer inherited his uncle’s House : the Dubois Father and Son Champagne House in Reims, founded in 1776.

In 1876, Louis Roederer II who succeeded his Father in 1870, created, upon request of Alexander II for the Russian tsar’s exclusive consumption, the Crystal vintage, a superior vintage that is an innovation for Champagne.

Then in 1908, tsar Nicolas II gave the title of “official supplier to His Imperial Majesty’s Court”. The crystal bottles carry the tsar’s coat of arms as a medallion.

The House kept growing under the watchful gaze of the next generations, among which Jean-Claude Rouzaud, who managed the House from 1980 to 2006, and Frédéric Rouzaud, his son, the current manager since 2006.

The vineyard spreads on 240 hectares, dispatched on the Reims mountain, the Marne valley, and the Côte des Blancs. Pinot Noir is the main variety. 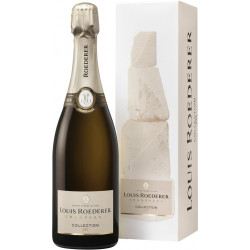