Until then, it remained a liqueur wine for local family consumption, and was marketed for the first time in 1921 by a Charente wine grower whose property was located not far from Saintes, the 2nd capital of Cognac.

Food pairing / Pineau des Charentes: as an aperitif with seafood canapés, smoked trout or smoked Scottish salmon, as a starter with half a Charentais melon, or foie gras, or as an ingredient in many recipes, see cheeses marbled. 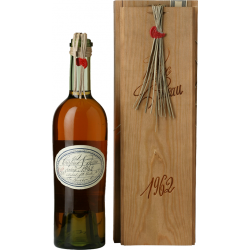